the retreat from moscow 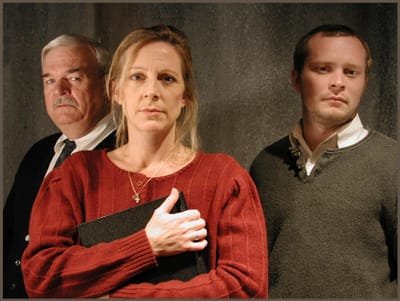 THE RETREAT FROM MOSCOW by William Henderson
directed by T.J. Walsh
CIRCLE THEATRE, FORT WORTH

A taste for the literary doesn't necessarily keep a play from resonating emotionally. In the case of The Retreat from Moscow, it's quite the contrary.

William Nicholson's drama about a failing marriage, which Circle Theatre is giving its regional premiere, is constructed with lapidary precision. Mostly the three characters talk two by two, just like in a Greek tragedy. In place of a chorus spouting a verse commentary on the actions, it's the characters who quote poetry.

The device doesn't seem precious because the wife, Alice (Elizabeth Rothan), is compiling a poetic anthology and has a reputation for memorizing. Her youthful brilliance, even her love of verse, attracted her husband, Edward (Gary Moody), 30 years ago. Now, however, Alice constantly picks at Edward, creating scenes even in public. He hides behind the history books he teaches from, another source of metaphors and parallels. One about the disastrous end of Napoleon's Russian invasion gives the play its name, in fact.

The parents manipulate and communicate through their grown son, Jamie (Bill Sebastian). Psychologists would call the process triangulation -- pulling a third party into a relationship as a buffer. Jamie identifies with both parents, which makes his position all the more difficult.

Bill Newberry's set and John Leach's lighting create a suitably poetic environment for the three actors to work in. Under T.J. Walsh's direction, they admirably bring off the challenging script.

Mr. Moody feels just right as the unambitious, unpretentious man exhausted by his wife's constant criticism A reticent character often becomes a cipher, but not here. Ms. Rothan gets the showiest role, and she's best at its most intense moments. At the beginning, she works a little too hard at the mannerisms and the accent. But there's no one else around who could give us so much of Alice's grief and anger. Mr. Sebastian fits comfortably in the scenes with the father and rises beautifully to the play's final scene, which sums up the curiously moving family drama.